The Fours – The 400m Hills of England

The 2nd edition of The Fours – The 400m Hills of England has been published by Mapping Mountains Publications and is now available to download as a 52 page e-booklet version for use on a PC, laptop, or e-reader, and as a print-booklet version if you want to make a paper copy of the booklet.  Both versions are free of charge.

The list is co-authored by Myrddyn Phillips and Aled Williams with the criteria being all English hills at or above 400m and below 500m in height and which have a minimum prominence of 30m.  Accompanying the main list of Fours are three categories of sub hills, these are entitled the ‘Drop Sub-Fours, ‘Height Sub-Fours’ and ‘Double Sub-Fours’. 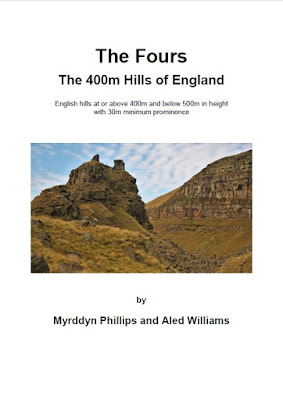 The list that is nowadays known as The Fours was first published in 2002 on the rhb Yahoo Group file database.  The list was re-evaluated for Europeaklist publication in December 2013 and all subsequent additions, deletions and reclassifications have been detailed on Mapping Mountains.

There are 296 hills that qualify for the main list of Fours, and 224 hills that are listed as Sub-Fours.

There are a number of initiatives included since the 1st edition of this booklet was published by Europeaklist, with the inclusion of historic (h) and artificial (a) hills, which are presented in the main and sub lists.

For the 2nd edition of The Fours, the hill-name information has been re-evaluated based on continuing historical and local research, whilst numerical data has been re-evaluated based on all interpolated summit and drop values being assessed via the 5m contouring on OS Maps in comparison to other scales of OS maps including the Interactive Coverage Map hosted on the Geograph website.  Surface heights from the series of OS Six-Inch maps are also presented.

Numerical data has also benefited from independent surveyors using GNSS receivers and LIDAR (Light Detecting & Ranging) analysis.  There are 520 hills listed in the main and sub lists, with 10% of these having been surveyed by GNSS receiver and over 29% having been analysed by LIDAR.

This has resulted in a number of reclassifications, both from Sub-Fours becoming Fours and vice versa, many of which have not previously been announced.  In particular, a number of new subs have been discovered since the Europeaklist publication, and likewise a number of subs have been deleted.

At the time of publication the combination of these has given the most accurate information to this height band of hills available.

The list is available from Mapping Mountains Publications as a downloadable:


For those accessing The Fours we hope you enjoy the list.

Email ThisBlogThis!Share to TwitterShare to FacebookShare to Pinterest
Labels: The Fours, The Fours - The 400m Hills of England - introduction to 2nd edition