The BEFours – The 400m Hills of Britain and Éire

The BEFours – The 400m Hills of Britain and éire

The concept of the BEFours was first mentioned in an article that introduced the BritFours published on Mapping Mountains and in the RHSoc magazine in March 2018.  This concept has now materialised in to a published list hosted on Phil Newby’s website; Haroldstreet.

The BEFours comprise all British and Irish hills at or above 400m and below 500m in height that have 30m minimum drop.  There are 2390 qualifying hills in this list and its component parts are the 400m P30s of England, Ireland, Isle of Man, Scotland and Wales, and there is no addition sub list. 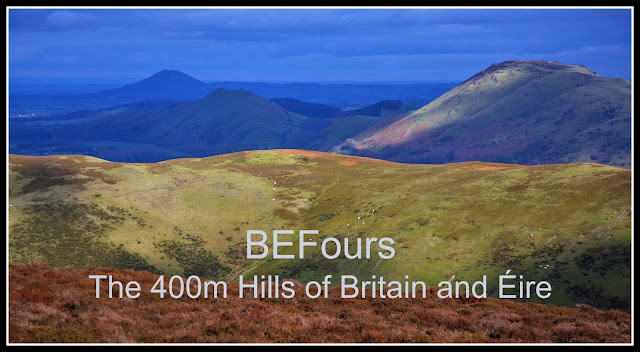 Data for these lists were initially originated by the late E D ‘Clem’ Clements and Myrddyn Phillips, with the custodianship of Clem’s list now transferred to his Legacy Committee.  Their publication details are:

The 400m Hills of Ireland were listed by Myrddyn Phillips and sent to the Mountaineering Council of Ireland in late 2002.  The list was subsequently published by MountainViews in 2007 (under the banner of ‘The Carns’), and later revised for DoBIH publication in 2013.

E D ‘Clem’ Clements was first to list the Scottish 400m P30s; these were published in March 2008 and appeared as a part of the Marilyn Tops of Scotland spreadsheet in the RHB file database.

It was the British data of these lists that were collated by Mark Jackson for the 400m banding of Tumps published June 2009.

The component parts to the BEFours have moved on since these lists first materialised 11 – 17 years ago.  Clem’s Scottish 400m list is now augmented into the Tumps, while the Welsh and English 400m lists are now co-authored with Aled Williams and have been re-named to Y Pedwarau – The 400m Hills of Wales and The Fours – The 400m Hills of England; these developments have refined the lists in terms of numerical data and hill-name information.  The 400m Hills of Ireland list aligns with that of the current DoBIH publication.

The source lists for the BEFours are available on Haroldstreet, Mapping Mountains and the DoBIH.

BEFours – The 400m Hills of Britain and éire – comprises all English, Irish, Manx, Scottish and Welsh hills 400m or more and below 500m in height that have 30m minimum drop and the list is available on Haroldstreet.

Email ThisBlogThis!Share to TwitterShare to FacebookShare to Pinterest
Labels: BEFours, BEFours – The 400m Hills of Britain and Éire